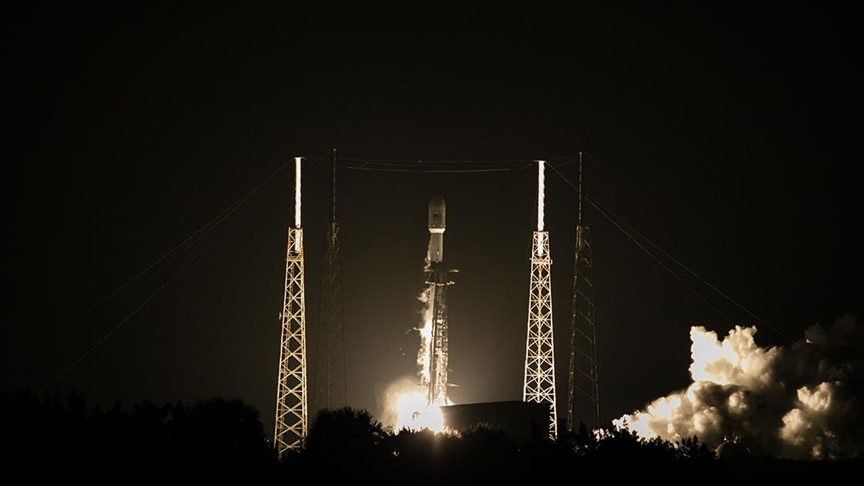 Minister of Transport and Infrastructure Karaismailoğlu stated that the Türksat 5B satellite will be launched into space on Sunday, December 19 at 06:58 with a Space X Falcon 9 rocket.

Adil Karaismailoğlu, Minister of Transport and Infrastructure, gave information about the company’s satellite, cable TV and e-Government services in a press release at the Türksat General Directorate.

Karaismailoğlu stated that the preparations for the launch of the satellite continue, “We will hold the ‘2nd Satellite Technologies Week’, where Turkey’s activities in the field of communication will be discussed, the Türksat 5B satellite will be launched into orbit and we will bring together the youth of our country, on 18-19 December at Türksat Gölbaşı Campus. Our Türksat 5B satellite will be launched on Sunday, December 19, 2021 at 06:58 with the Space X Falcon 9 rocket.” used the phrases.

Drawing attention to the innovations that Türksat 5B will add to its satellite fleet, Karaismailoğlu said:

“Türksat 5B will increase Turkey’s Ka-Band capacity, which is satellite and communication capability, by 15 times. Türksat 5B, which will be our most powerful satellite in terms of payload and power values, has 20 times more efficiency than fixed class satellites. With our satellite, which will have a very large coverage capacity, we will be able to address the whole of the Middle East, the Persian Gulf, the Red Sea, the Mediterranean, North and East Africa, Nigeria, South Africa and close neighboring countries, as well as Turkey. Our new satellite will also provide a total data transmission capacity of more than 55 Gbps with Ka-Band payload using frequency reuse and multi-beam coverage concepts.” 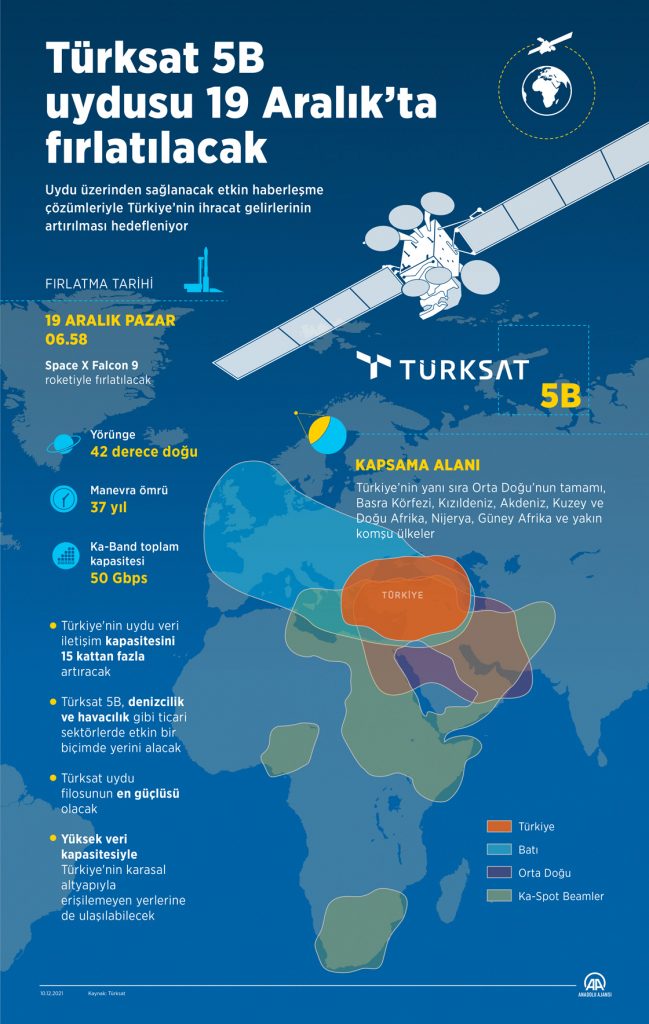 “For the first time, domestically designed equipment will be sent to space”
Pointing out that one of the best examples of domestic and national satellite construction works in Turkey was seen in Türksat 5B, Karaismailoğlu made the following assessment:

“The ‘Domestic Industry Contribution Program’ determined by Türksat was implemented in Türksat 5B. Two communication equipments produced in our country are used in Türksat 5B satellite. In this way, for the first time, the equipment designed and produced locally in a commercial communication satellite will be sent into space with the Türksat 5B satellite. Our satellite, which will serve for more than 35 years in 42 degrees east orbit, will also take its place effectively in commercial sectors such as maritime and aviation. In addition, with the high data capacity provided by Türksat 5B satellite, we will be able to easily establish internet infrastructure in places that cannot be accessed by terrestrial infrastructure.”

“The number of active communication satellites in Turkey will increase to 5”
Minister Karaismailoğlu pointed out that Türksat 5B, which has a launch weight of 4.5 tons and a power capacity of 15 kilowatts, has a new generation electric propulsion system, and that the new satellite, which will also provide backup service to Türksat 3A and Türksat 4A satellites, will also protect the frequency usage rights in these orbits. .

Emphasizing that Türksat 5B, beyond its technical features, will provide an important cost and added value advantage for public institutions and private companies with the increase in the communication capacity it will bring, Karaismailoğlu said, “It will improve Türksat’s competitiveness in the global market, especially in commercial sectors such as maritime and aviation. It is also aimed to increase the export revenues of Türksat and our country with our satellite to be used.” said.

Karaismailoğlu stated that with Türksat 5B to be delivered in orbit, the number of active communication satellites in Turkey will increase to 5 and the total number of satellites to 8.

Karaismailoğlu pointed out that the distance that Turkey, which was only a spectator in space studies until 2002, has covered in this field in 19 years is one of the important results of the stability provided by the AK Party government, and said:

“With our domestic and national satellites, we will be among the top 10 countries in the world that can produce satellites. This means that hundreds of millions of dollars, which are likely to be paid to the producing countries for the satellite production cost, remain in our country. We will not be dependent on anyone in an area of ​​strategic importance such as communication. It will also be possible for us to get a share from the satellite industry, which has a global market value of $271 billion. The assembly, integration and tests of Türksat 6A, which will be the apple of our eye in the global satellite industry, are carried out at Ankara Space Systems Integration and Test Center. We plan to send our domestic and national satellite Türksat 6A into space in 2023.
Thanks to Türksat 6A’s eastern coverage, which includes India, the satellite coverage area of ​​our country will also expand. Competing with the satellite and space studies of the world’s leading countries is a result of the domestic and national technology move together with the environment of trust and stability in our country in the last 19 years.

Karaismailoğlu stated that Turkey’s growth moves, successes in foreign trade, and honor studies in satellite and space studies disturbed some circles, and said:

“The young engineers of our nation and the managers who put their hearts into these works may be making someone jealous with their domestic and national moves. We understand very well what is behind the recent attacks on our economy and why. Our domestic and national moves continue in every field from the national electric train set, national satellites, transportation and communication to our defense industry.”