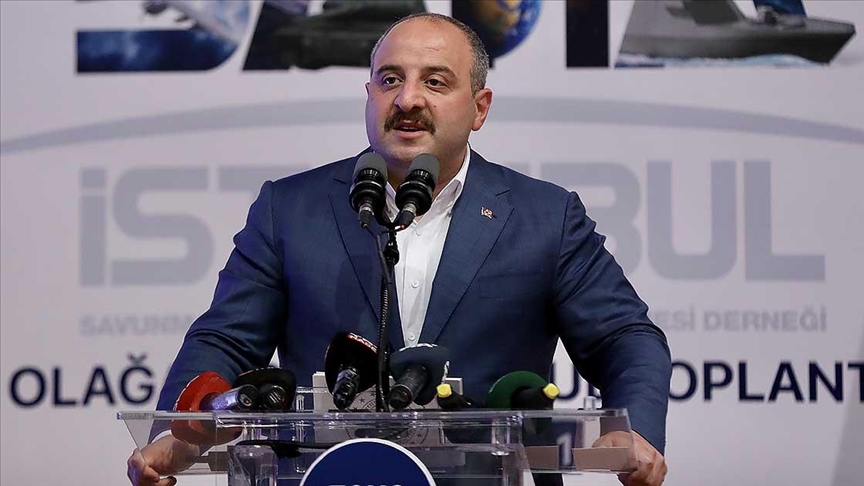 Industry and Technology Minister Mustafa Varank celebrated the Veterans Day of all heroes who fought for the unity and peace of the homeland at the 4th Ordinary General Assembly Meeting of the Defense, Aviation and Space Clustering Association (SAHA Istanbul) held at the Informatics Valley Conference Hall.

Noting that SAHA Istanbul, which was established only 6 years ago, has become Turkey’s largest industrial cluster in a short time, Varank noted that they gladly follow this development, which is the product of systematic and devoted work.

Emphasizing that the main motivation behind this success is not financial gain, but the love of serving the nation and the beautiful country, Varank expressed that he wholeheartedly believes that thanks to such initiatives with patriotic codes, the country will rise to a leading position in the world in defense, aviation and space.

Minister Varank stated that they provided the necessary support to the initiatives launched by Saha Istanbul and said:

“For example, we have matured the process that started with the localization of CNC control systems and led to Milteksan together. The call for Pre-Competitive Cooperation Projects for the development of the open source native ERP system in our country was shaped as a result of the consultations of our Ministry and SAHA Istanbul. Again, with SAHA Istanbul, we have developed the industrial clusters of our cities locally. We work together to develop and integrate it into the national ecosystem. Of course, we still have a long way to go. This is a long and arduous process, but it is clear that success will be destined with devoted and dedicated staff. We will continue to stand by you always with great pleasure. On this occasion, I wish the general assembly to be auspicious.”

“Hopefully, by the end of the year, we will break the record of the history of the Republic in exports”
Emphasizing that the fields of defense, aviation and space have become the guarantee of national security for countries, Varank noted that even the most powerful countries in the world continue to allocate a large part of their national income to the defense industry without hesitation.

Explaining that the acceleration in the defense industry has also improved other sectors with the multiplier effect, Minister Varank said:

“It makes significant contributions to the production, exports and employment of our country. Here are the records we broke in production and exports, despite the pandemic today. In the second quarter of 2021, our gross domestic product increased by 21.7 percent. With this successful performance we achieved under the leadership of the manufacturing industry, OECD countries We took the second place among the companies. Again, there is a record increase of 52 percent in our exports on an annual basis. Our exports in the first 8 months have exceeded 140 billion dollars. I hope we will surpass 200 or even 210 billion dollars at the end of the year, breaking the record of the history of the Republic.

You know, unfortunately, Turkey started its defense industry journey too late, apart from a few breakthroughs made during the Republican period. However, with the vision of the National Technology Move, which we put forward under the leadership of our President, we have almost entered a period of rearing. We have succeeded in increasing the local rate of 25 percent in the defense industry to 75 percent. Of course, this journey is not over yet. In the critical sectors and critical systems of the defense industry, we aim to reach 100 percent locality in some areas. Our ancestors have a very good saying; He said, ‘He who rides a horse will get off quickly’. Rather than looking at what others are doing, we focus on what we have in our bags.”

Pointing out that they established specialized OIZs for the defense industry in order to ensure cooperation and clustering, Varank continued as follows:

“Kırıkkale Arms Industry Specialized OIZ and Ankara Space and Aviation Specialized OIZ are the leading ones. When these regions are completed and put into operation at full capacity, they will be the heart of the defense and aviation sector. Again, Konya Technology Industry Zone is one of our important projects in this regard. Here, too, defense, space and aviation “With these projects, our defense industry breakthroughs will spread all over our country.”

“The Blue Homeland is as halal to this country as its mother’s white milk”
Stating that Turkey’s destiny is together with the destiny of this geography, Minister Varank said, “Great and strong Turkey is the guarantee of a bright future for all countries in the region. It is with this awareness and determination that we have set ourselves challenging targets, especially in defense, space and aviation.” said.

Emphasizing that the way to achieve these goals is to be one, together and with one heart, Varank said:

“We need to play a team game by including all parties without delaying anyone, and by including all parties in the business. Of course, we need to be aware of the political climate while doing this. It came to the agenda yesterday. The Republican People’s Party has a deputy. We can say that the former ambassador is a monarch. He says. ‘The Blue Homeland means expansionism.’ If we do not support the Blue Homeland mentality and our own domestic and national projects, we will not have a chance to succeed. , chief advisor to the Chairman of the Republican People’s Party, ‘Blue Homeland is expansionism.’ If he says that, it means that we are working in vain. I want to call out to Mr. Kılıçdaroğlu from here: Either you take this person out of your party as you keep his ear, or if you want to do politics, I say go do politics in Greece, if you are defending the theses of Greece.”

Stating that their biggest capital in realizing vision projects is young and dynamic human resources, Varank noted that they have implemented many special policies that will increase the quality of young people and make them love technology.

“We are waiting for all our children with their families to TEKNOFEST”
Explaining that new generation approaches such as TEKNOFEST, Experiap Technology Workshops, and Ekol 42 Schools have transformed this potential into kinetic, Varank said, “Here is TEKNOFEST, which our young people are eagerly waiting for every year, and this year has arrived. We invite all our children to TEKNOFEST, which will take place at Istanbul Atatürk Airport on September 21-26. We are waiting for all our young people with their families.” said.

Varank said, “Today’s youth will be the architects of 2053 and 2071 goals. Turkey will become an industry and technology country that has made a name for itself more often with the multiplier effect created by the successes it has achieved in the field of defense, aviation and space.” used the phrases.

Congratulating SAHA Istanbul management and its stakeholders for their devoted work, Varank wished the general assembly to be conducive to good luck.